Slowly actors up and down the nation are returning to their hectic filming schedules. As every actor can tell you, eating well is a very important part of maintaining their strength and energy to keep filming. To celebrate being back in front of the cameras the clients at Hog Roast Westminster’s latest catering event wanted the team to put together a simply sensational dinnertime buffet as the actors and members of staff behind the cameras all took a break before continuing to film.

The menu for the buffet was one of comfort food that would please and sustain all the hard working team members through the long hour of work ahead. All the dishes for the buffet were created fresh onsite at the location of filming. Hog Roast Westminster was trusted with the top secret location and arrived at the base camp, which was full of trailers and gazebos, by 2pm in order for the 8pm serving time to be met. Every single dish was made by hand by the Catering Manager and two assistants as the buffet was being created for a large cast and crew of 125 people. 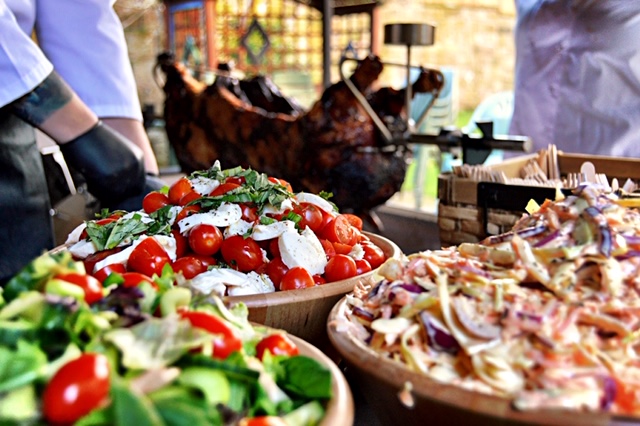 Included in the buffet was a delicious Classic Hog Roast, the pig was spit roasted slowly for optimum flavour and was served with crispy crackling, homemade stuffing and apple sauce. There was however vegetarian and vegan selections, including grilled vegetable and halloumi skewers and cous cous. Also on offer at the buffet was coleslaw, crispy Thai salad and tasty avocado and cherry tomato salad. Finishing off the buffet was lots of lovely, piping hot jacket potatoes. There really was something for everyone.

As part of the catering package the clients selected the guests were able to use Hog Roast Westminster’s finest bamboo crockery and cutlery, which was able to be washed and re-used at future events.

The clients and their hungry workers were delighted! It gave the cast and crew plenty of energy to continue filming well into the night. As the team discreetly tidied up and took all the rubbish away from the location, they reflected that it had been a very exciting and fulfilling event.